Got a question?
Benoît will guide you! 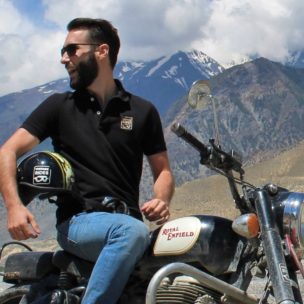 A raw beauty, pristine valleys, fine-sand beaches, sea as blue as the sky: welcome to Sardinia! A Royal Enfield Trip in Sardinia will make you discover an intensely charming Mediterranean island, which is still untouched and well preserved. Whether it is in the inland areas or on the coastal roads, a motorcycle tour of the region is the perfect way to spend your holidays. From Olbia or Cagliari, take the Orientale Sarda and enjoy magnificent coastal landscapes of San Teodoro, Orosei or even Villasimius. Riding a motorcycle on the mountain roads, you will explore a highly authentic Sardinian hinterland and cross several typical Italian villages. Don’t forget Ogliastra, a popular destination for bikers because of its panoramic coastal road. In the evening, enjoy the vibrant nightlife and several bars and restaurants overlooking the sea. A motorcycle trip in Sardinia will take you to the heart of an extremely rich and unique culture. This is also the occasion to try the Italian culinary delicacies. This motorcycle trip in Sardinia will take you far from the conventional tracks and promise unique panoramas of the Mediterranean Sea.

When should one leave for Sardinia?

In Sardinia, the weather is always great and temperatures pleasant a good part of the year for embarking on a motorcycle trip. Similar to the southern parts of Italy, the climate in Sardinia is typically Mediterranean: hot and dry summers and very pleasant winters. In the summer, the temperatures in Sardinia can be really high, especially in the southern part of the island. If you want the cool weather in summer, go to the central part of Sardinia, which is a region of plateaus and mountains. Spring and autumn are the best seasons for a motorcycle trip in Sardinia. In this period, the entire island enjoys temperatures varying between 20° and 25°C, without any heat wave. In the mountainous centre, winter can be harsher and snow present on the peaks. In the summer, during the months of July and August, a dry and burning wind from Africa, blows continuously over the island. Thus opt for spring and autumn to enjoy a better climate and avoid the crowds, who generally bunch together the coastal in areas during the summer months. In the months of May-June and September-October, rainfall is very rare and the temperatures ideal for a motorcycle trip in Sardinia without having to face heat issues.

Sardinia is an Italian island opening out to the Mediterranean Sea, with the Tyrrhenian sea to its east and the Sea of Sardinia to the West. A motorcycle trip in Sardinia is the time to discover one of the most beautiful islands of Europe. Thrice as big as the Corsica, it has a coastline measuring 1869 km. There is a long mountain range running through it from the north-west to the south-east. Mount Gennargentu, the highest peak of Sardinia reaches an altitude of 1 834 m. The hills and the small mountains form diversified landscapes. One of the most ancient territories in Italy, the geology of Sardinia is remarkable with ancient rocks. Two rivers, Flumendosa and Triso, are used for irrigation through dams and artificial lakes. In the island’s interior, you will see beautiful forests with chestnut trees, walnut trees or beech trees. Though close to the sea, the bush made up of junipers, arbutus and laurels form a typically Mediterranean vegetation. Protected and wild, Sardinia is sparsely populated with its population concentrated in villages. Between the sea and the mountains, embark on a motorcycle adventure in Sardinia under the Mediterranean sun.

History and culture of Sardinia

During your motorcycle trip in Sardinia, you will discover a country with a strong identity and a unique culture. At the crossroads of Spain and Italy, it has been much coveted in the past and today attracts travellers looking for new horizons and authenticity. The nuragico culture, the cornerstone of Sardinian society, has left its mark on the territory as is reflected by numerous constructions, the nuraghes. Big stone monuments, the nuraghes are an integral part of Sardinia’s history and symbols of the island. The Phoenicians followed by the Romans put an end to the Nuragico society. Today, Sardinia is an Italian island, but for two centuries, it was under Spanish rule. Early in the 18th century, France gave it to the Duke of Savoy. It was not until Garibaldi unified Italy in 1860 that it became Italian. In 1948, Sardinia became an autonomous Italian region. This status allows it to protect its culture and its specificities such as the Sardinian language. Ignored and forgotten for a long time, Sardinia has been developing the tourism sector since the last few years to increase employment. Costa Smeralda, known for its rugged coastline and transparent waters, attracts many tourists.

All Motorcycle trips in Sardinia

“Embark on a 5-day off-road adventure to discover the wilderness of an island with 1000 facets.”

It was through Florian, motorcycle travel expert at Vintage Rides and Benoît's childhood friend, that he discovered Vintage Rides. After a year in China, India has been his new adopted country from which he explored the roads on his Royal Enfield. 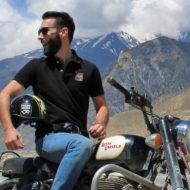