Got a question?
Ben will guide you! 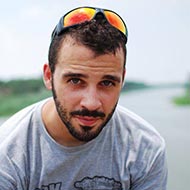 Discover our Motorcycle Tour in Algeria

A Royal Enfield motorcycle tour in Algeria is a guaranteed change of scenery in one of the most charming countries of the Maghreb. In the south towards the Hoggar Mountains, the country's highest peak, arid landscapes are peppered with oases and shaped by volcanoes. Even further south, crossing the Tassili du Hoggar, you reach the mythical Tuareg capital, Tamanrasset. Explore the Tademaït Plateau or the Kabylie mountains between the Sahara and the Grand Erg Occidental. We'll take you on a fascinating motorcycle tour in Algeria on beautiful mountain roads followed by paths and tracks far from the traditional tourist spots to dunes hidden in the mountains. Algeria is an unspoilt destination yet to be discovered by mass tourism and ready to show you its legendary hospitality. In addition to stunning scenery and natural wonders, you'll also discover captivating cities such as Algiers, Oran and Constantine.

The best season for a motorcycle tour in Algeria is spring or autumn. The north of the country, including the coastline and the Tell Atlas, enjoys a Mediterranean climate with hot summers and mild winters. Temperatures change depending on the altitude: the thermometer soars on the plains or the coast but the Hoggar Mountains are much cooler. On the coast, winter generally coincides with the rainy season. The centre’s mountainous regions experience harsh winters. From December to March, the Tlemcen, Kabylie and Atlas mountains are snow-capped. The Sahara region has an arid climate, with very little rain and the best time to visit this area is from November to February but there is a significant difference in temperature between day and night. Due to the scorching temperatures, we generally recommend against visiting Algeria during summer but spring or autumn are perfect for planning a trip.

Sandwiched between Morocco and Tunisia, Algeria is bounded to the north by the Mediterranean Sea. Algeria’s main relief features are the Tell Atlas to the north, the Hautes Plaines and Saharan Atlas in the centre and the Sahara to the south. The Tell Atlas stretches along the coast and reaches over 2,300 m altitude. During your motorcycle tour in Algeria, you will cross the Ouarsenis, Kabylie and Djebel Chenoua mountain ranges. To the south of the Tell Atlas are the Hautes Plaines, consisting of undulating plains, which become salt-water lakes after the rainy season. Further south, the Saharan Atlas is dotted with oases that mark out the gateway to the Saharan desert, which covers around 85% of Algeria. Far from the sand dunes, discover the volcanic, moonlike landscapes of the Hoggar Mountains and the Tassili n’Ajjer national park. The highest peak in Algeria, Mount Tahat, stands proud at 2,918 metres altitude and is part of the Hoggar Mountain range.

During your motorcycle tour in Algeria, you’ll discover that this country has an extremely rich history. Dynasties followed one after the other until the Spanish arrived in the 16th century, seizing Oran, then Algiers before giving way to the Ottoman Empire. Algeria then took the name “the Regency of Algiers” and was governed by the Sublime Porte until 1830. French troops descended on the country that same year and Algeria became a French colony. Abd el-Kader surrendered to Prince Henri d’Orléans, Governor-General of Algeria in 1847. In 1954, the Algerian war, known as the “Algerian events”, pitted the French army against Algerian nationalist insurgents. The conflict ended in 1962 with Algeria gaining independence, causing a mass exodus of around a million pieds noirs. In the 1970s, Algeria embarked on important industrial, agricultural and cultural revolutions before sinking into political and social crisis. Since assuming office in 1999, President Abdelaziz Bouteflika has prioritised restoring peace in the country.