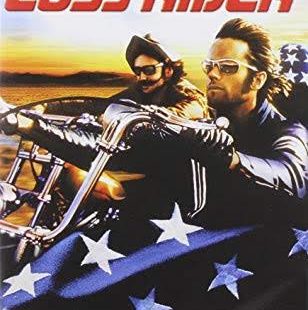 Born to be wild on Route 66

Easy Rider is an American epic of two guys on two wheels, played by Dennis Hopper and Peter Fonda, who later come across Jack Nicholson. Just the explosive cast is enough to set the tone. After a successful drug deal, the bikers challenge themselves to ride from Los Angeles to New Orleans in time for carnival. But not on any old motorcycle; on a Harley Davidson chopper, no less. Four 1951 Harley Hydra Glide Panheads were used in the making of the film and the characters carved out the road with the only objective being their quest for freedom. From Santa Monica to Flagstaff, the film then takes us deep into an initiation expedition: a motorcycle travel into the heart of 60s America against the backdrop of the hippy movement and the Wild West landscapes.

Waving the flag of freedom

Fringed jackets, long hair, sideburns and moustaches, not to mention the drugs and prostitutes: the sidekicks and their spluttering bike stood out in the conservative, rural south. But that’s where the film’s strength lies. So much more than an adventure film with a rock ‘n’ roll soundtrack, Easy Rider successfully questions the concept of freedom in our western societies. As a symbol of protest, it did not only mark the start of a new era for independent film-making, it also put the chopper scene on the map. Quintessentially American, these long-forked custom motorcycles make the Harley’s heavier parts lighter, which is where the name chopper comes from, i.e. parts are “chopped” to give the bike more speed or power. This legendary style became popular thanks to Easy Rider and its famous Captain America bike, which is synonymous with this way of life and a sense of absolute freedom. 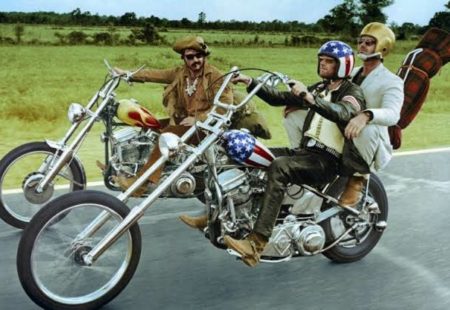 You too can set off on a once-in-a-lifetime adventure exploring the wild Ladakh region during a Royal Enfield tour Himalayas! Why not join Vintage Rides on a guided motorcycle tour for a complete change of scenery and an authentic adventure?

Read the article
Vintage Rides>The blog>Travel Stories>Easy Rider, the film: a biker odyssey
×
Subscribe to the newsletter
Thank You