After a first trip in Rajasthan, our rider Paul discovered the southern part of India on our 'Spices Route' trip.

Back in November 2015 I had my first taste of motorcycling in India with a visit to Rajasthan where I joined a group of like-minded individuals for a tour arranged by a French company ‘Vintage Rides’. It was a wonderful experience with seamless organisation. So it was that when a further tour, this time to Southern India was dangled in front of me the temptation was irresistible.

With the formalities completed including of course the ‘on-line’ tourist visa application and the inevitable waiting for the great day to arrive I was finally able to leave home to embark on my second adventure to the sub-continent via Dubai, courtesy of Emirates airlines, eventually to arrive at Kochi in the state of Kerala, South West India early on a Friday morning. The taxi was waiting for me and soon I was at the Hotel Fort Cochin the point of departure for the ride. Kochi has a big commercial port sheltered by a coastal peninsular. The area is known as ‘The Backwaters’ and is a haven for wildlife with small settlements at the water-side and much work related water activity. Arriving to the hotel I found that I had a guest billeted to share my room, he was a Frenchman named Francis from South West France and he really was a great guy, we got on very well and communication was good with his knowledge of English and my fragmented and strangled French.

The bikes had arrived, all shiny and dark green or black 500cc Royal Enfield Bullets and we were invited to choose one for the duration of our expedition. The group leader, Jean, was a Frenchman from Chamonix and the rest of us motley crew were a mixed bag of abilities and ages with myself being the eldest by several years. We had three lady riders with us and a husband and wife sharing a bike. There was a back-up mini bus and driver with a heap of spares in the back who also transported our luggage from place to place and an ever smiling Royal Enfield trained mechanic. Everyone had brought their own kit, including helmets, with them and astride our new mounts we set off for a short group tour of Kochi to familiarise ourselves with the machines.

The following day we ventured further afield starting with a ferry crossing to what was described as ‘The Island’. Anyone who has seen chaos will imagine what about 100 bikes and a good helping of cars trying to board a small ferry all at the same time looks like, but in spite of all the pushing and shoving the embarkation and disembarkation was achieved with relative good humour. We were rewarded with some reasonable riding in very warm conditions despite the challenging habits of the average Indian driver or rider, or indeed anyone bent on driving their animals up the middle of the road! A lovely café for lunch and a dip in the Arabian Sea from a deserted beach of golden sands. The climate of Kerala is tropical being just north of the equator and the consumption of bottled water dished out from the mini-bus throughout the ride was phenomenal. 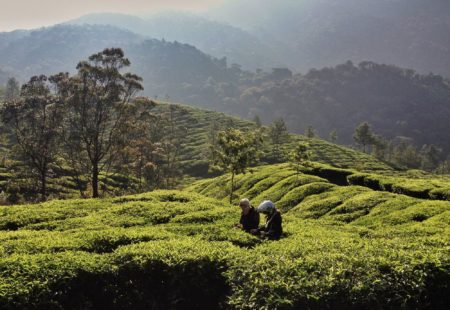 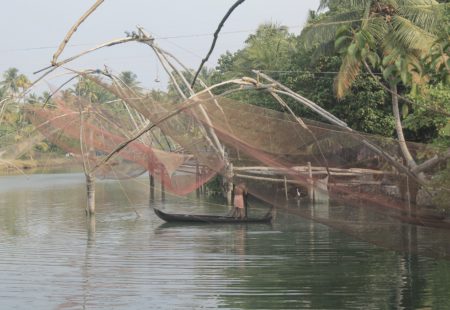 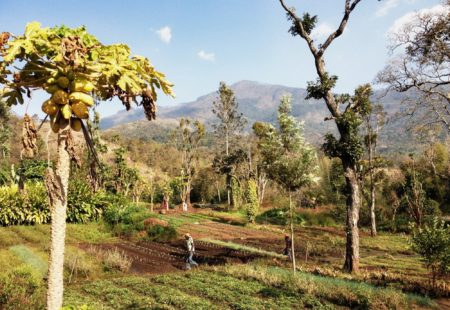 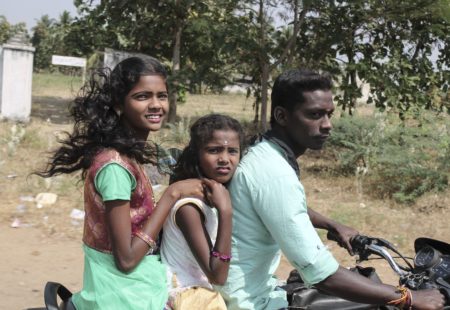 On Tuesday we departed the hotel after a very early breakfast at the hotel on the terrace at the waterside. Typically yoghurt and honey, cereals, pineapple juice and an omelette. Like all Indian food; largely vegetarian. Our first destination was Munnar some 200kms away and high in the hills of the interior. Being tropical, the hours of daylight are from about 6.00am to 6.00pm and darkness falls very quickly. We just scraped in before dark at the hotel set high on a hill and, after sorting out the luggage and a welcome shower, we made our way to the restaurant and bar for a very welcome drink and meal.

Departure on the Wednesday was again early and a delight to be away from town traffic to enjoy the twisty mountain roads but ever watchful for that pot hole to trap the unsuspecting. Our destination was Thrissor some 220kms for the days ride.

A land of spices

Our daily routine followed a similar pattern with early starts and distances ranging between 110 and on one day 288kms and the route was generally circular travelling clockwise for a total distance of 1600kms over 11 days of riding. Our tour guide gave plenty of opportunities for a rest break every couple of hours or less and typically we would stop at a roadside tea bar where most would try a cup of Chai. The tour visited some very beautiful areas and the tea plantations around Ooty were something splendid to behold. Our itinerary included a visit to the tea processing factory and of course tasting of the infusions but, curiously, the factory also specialised in chocolate products - underlining the Indian taste for sweet meats.

All good things must come to an end and we completed the circuit returning to Kochi on the last day to bid a fond farewell to our trusty steeds and get cleaned up for our final evening together. The restaurant at the Old Harbour Hotel was chosen and was perfect for the climax of the tour with our table being out in the open air in the garden and, with Indian sitar music and drums playing softly in the background, we relived our adventures.

To see ‘real’ India there can be no better way than by motorcycle that will take you places where the ordinary guided tour does not go and a camaraderie builds with your fellow riders.

This is my second impression of India and the content of these few lines cannot convey the full extent of the experience. It has many problems but is a mysterious and fascinating place. Filthy dirty at times and full of contradictions, but I was struck by the general happiness that is found everywhere. Busy little shops where you can buy anything and endless expectation for a gratuity for any service rendered. It is a place you must visit and
experience for yourself. So many memories of a wonderful holiday spent in the best of company.