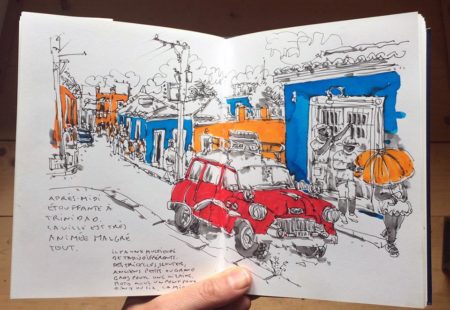 Eyes are the window to the soul

Born at the beginning of the sixties near Geneva, Laurent studied decorative arts before doing a bit of printing and finally settling as a freelance graphic designer in his own studio. He also teaches applied arts at a school in Chaux-de-Fonds in Jura, Switzerland. We're pretty sure that working with students helps make him stay so inquisitive. Because when we met Laurent, he was that cool, we were almost certain he was still a student. He puts the shyest of us at ease. During his free time, he loves to draw his surroundings. His sketchbooks are full of lively natural drawings illustrating his travels and escapades around Geneva.

An introduction in Rajasthan

His first road trips were in the 1980s on a Suzuki 125 and he later went on some beautiful road trips in Turkey and Greece on a BMW R100. A family man, he got settled and took a break from biking. After about a decade without getting on a bike, his childhood friend, Serge, proposed a motorcycle tour in North India. In 2012, the two mates took the plunge and head to Rajasthan. Just the two of them, no tour leader, no accommodation reservations, no mechanical assistance. The Vintage Rides team met the funny Swiss pair at the Delhi garage to give them their bikes, some spare parts, a GPS and a few invaluable Enfield tips. 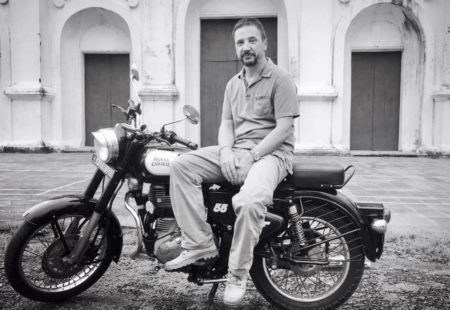 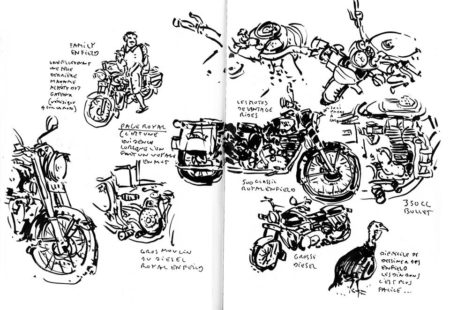 As carefree as 20-year-olds, but as wise as 50-year-olds, it was the first time the two friends had ridden in India and even touched a Royal Enfield. And it wasn’t any Royal Enfield: it was a Machismo 500 with a kick start. They left the "inferno" that is Delhi with cold sweats before hitting the blazing tracks of the Thar Desert. They discovered the roller coasters that India has in store: the breakdowns one day and the rewards the next. They got lost and grew impatient before arriving at Jodhpur. But all the stress was worth it when they were awed by the magnificent views of Mehrangarh Fort from a rooftop terrace. An unforgettable moment that some of us have had the chance to experience in the blue city. When they got back to Delhi, François greeted Laurent and Serge, their visors black with dust and stars in their eyes. They’d got on well, it was a success!

A beautiful touch of madness

When he returned from India, Laurent bought a Triumph Bonneville. He wanted to bring a bike back into his daily routine and go riding with friends. Two years later, he took a trip to Kerala on the spices route freedom tour with Serge. François met up with the two adventurers in Fort Kochi and forged a closer friendship with Laurent. That's when he discovered his travel sketches. "Laurent really knows how to put what we can see and feel in this great country down on paper. He mixes the details and captures the region's atmosphere using his sharp and sensitive eye," François told us. This motorcycle tour in Kerala confirmed their diagnosis: the two pals had become addicted to India and riding. They returned in spring 2015, but this time head to Uttarakhand on the roads of the Himalayan foothills. 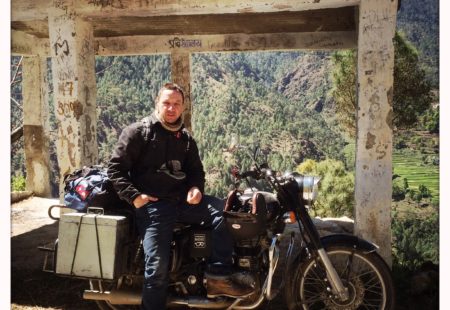 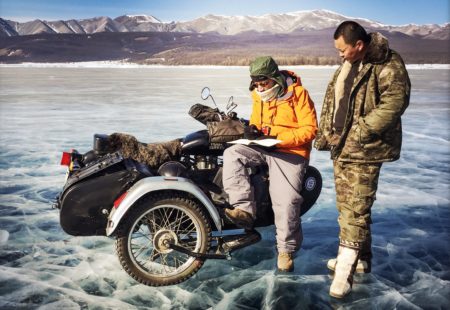 Being a sucker for beautiful things and beautiful objects, a bike's aesthetics are important to Laurent, as French writer Sylvain Tesson would say. Besides, he loves all of the intrepid writer's books. It was after reading Berezina, which recounts an incredible journey on motorcycles (and sidecars) from Moscow to Paris, when he started dreaming about sidecars. He fell for a fantastic Ural in Geneva that he took on the small tracks around him up to Burgundy on the wine trail. In the meantime, he found out that Vintage Rides was organising a trip in Mongolia involving a sidecar on a frozen lake and he wanted to take part at all costs. He had to wait patiently to find out whether he had a space on the Frozen Ride expedition in March 2019. But nothing could stop a man thirsty for adventure. In fact, Laurent went through it all before he joined the rest of the group on Lake Khövsgöl. First, he missed his connection in Moscow. After a 32-hour delay, he finally landed in Ulaanbaatar, but his luggage didn't. Even then, he still had a 12-hour journey to get to Khövsgöl and catch up with the rest of the group. He drove across the steppes at night taking over from his Mongolian driver who fell asleep. The feat was worth it once the group was finally united on the enormous frozen lake!

Even though he didn't have any luggage, he did have his sketchbook and markers, so Laurent drew every day. As soon as he'd see a picture-perfect opportunity, he would step to one side, take out his sketchbook and brave the cold to scribble down whatever stood before him. His drawings are lively and soft, and he perfectly expresses the essence with poetry and light. Everyone, from the nomads, the Mongolian crew and other group members would line up behind him, curious to see what he was doodling.

When we asked him to tell us about that famous Royal Enfield tour Mongolia, he started by admitting that he was not disappointed to travel in a group. "It's not usually my thing, but the atmosphere played a big part. I couldn't have imagined going on such a big expedition with guys that were moaning and groaning all the time." The group was made up of two English-speakers and three Frenchmen who very quickly forged lifelong bonds. "This unique, intense experience helped us get closer quicker." Laurent shared a sidecar with another Laurent. It was the perfect partnership: two mischievous big kids. François led the adventure, accompanied by Jean Burdet, the genius behind the uncommon combinations. These men are not merely bikers; they are adventure seekers discovering the art of gliding. "On a trip like this, our main vulnerability was that we didn't know what to expect from the Khövsgöl. But we soon forgot about everything and it felt like we were riding on a dream, riding the heavens!" 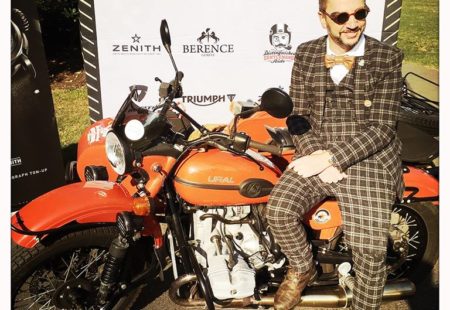 In 2015, Laurent took part in his first Gentleman’s Ride in Geneva, an event that brought together almost 300 people to raise funds for prostate cancer. As the top donor in 2017, the Gentlemen GVA approached Laurent and asked him to become an active member of this team of philanthropist riders, vintage amateurs and retro bikers. Two years ago, he went down to the Wheels and Waves festival in Biarritz with his Land Rover Defender, his Triumph and some other beauties on a trailer and even rode across the Bardenas desert in Spain. This summer, he is setting off on a road trip in Scotland before taking part in the Distinguished Gentleman's Ride at the end of September. This aficionado of bikes and vast spaces wants to take a closer look at life: "There are still so many things to explore and draw around you or on the other end of the earth!" He never ceases to dream of faraway lands. Until he jets off again, he has a weekend reunion on the books with the other Frozen Riders at the end of the summer around Satigny's vineyards.