Our rider Paul explored Thailand with Vintage Rides. He's sharing here his experience and adventure on the road.

In England the days had shortened and the warmer Summer months were but a memory, and with Christmas peering over the horizon the adventure for which I had been planning since February was drawing near with all the arrangements in place with Vintage Rides and my flights booked I was confident that it was to be another memorable two weeks. 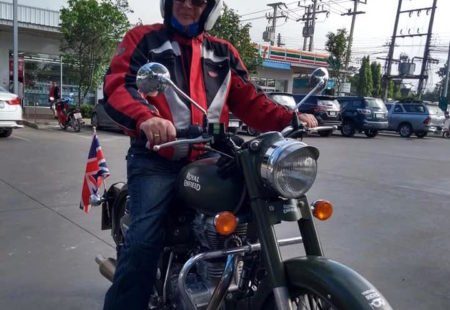 The reason for my confidence being that I had made two previous motorcycle tours to India with Vintage Rides and both will live long in my mind as being fantastic, really eye opening experiences in the capable hands of a company that is an expert in its field. This time I was to be travelling a little further afield to Thailand, a country that I knew pretty well nothing about. On my earlier excursions I had discovered that unsurprisingly with a French based company most of my companions were French or French speakers and it had not been a problem with any language barrier then and was not likely to be so this time. Indeed I personally knew three of the other riders on this trip and was naturally very pleased to see them all again. The group also included two other Brits on their first excursion with Vintage.

It was with great relief that I finally arrived at Chiang Mai airport Northern Thailand on Wednesday evening after three separate flights beginning in Birmingham, UK some 20 hrs earlier. No more cold days for a short time. There waiting to greet me were my French friends from previous years and soon joined by Ravi the tour leader. It was time to venture out to explore the city where a huge festival was in full swing. The sky was dotted with ‘Chinese Lanterns’ and thousands of small decorated floats made with flowers and greenery each bearing a lighted candle were being born away by the flow of the river as the festival of Yee Ping was celebrated. On the streets we soon found a café open to the sky and ordered our meal but perhaps even more welcome was my first bottle of Chang lager style beer to slake a thirst from all the travelling. 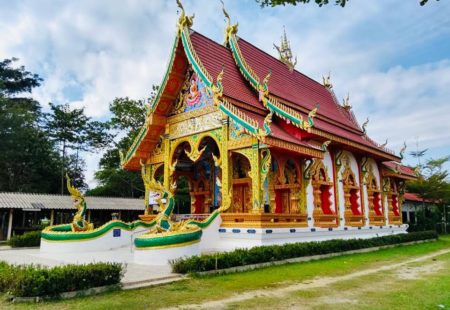 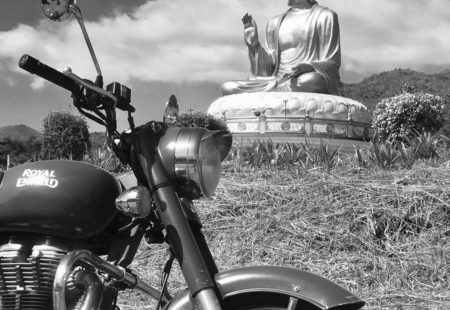 Vintage Rides: a Royal Enfield and a complete assistance

It appears to me that the essence of the Vintage experience is down to team work and there is no doubt in my mind that the ethos of the company is carried right through from the inception of the routes to the time of the first reservation. It is as if one is on a journey before even seeing a motorcycle being kept informed and welcomed along the way until the time of arrival at the start point of the tour. It is hardly a surprise to discover that the same ethic applies throughout the ride and we soon became a team of friends in our own right. Our tour leader Ravi, a man from Northern India is a very affable guy, good on the bike too but very mindful of the riders and participants on the ride. The Vintage set up is as good as it gets and it is difficult to see where any improvements could be made. For this ride we also had the services of a local Thai guy who stayed with us for the duration and always went the extra few miles to show us Westerners the intricacies of life in the Far East.

Working harmoniously with the leader and the guide were two others, our very capable mechanic who could be seen at the end of everyday checking the bikes over, cleaning and preparing them in the morning for the day ahead. Of no less importance was our support vehicle driver at the wheel of the mini bus cum spare parts vehicle. He was certainly an expert at his trade keeping the vehicle usually in sight of the rest of us and shielding the line of riders when it was necessary to venture out into the stream of traffic for example after we had stopped for fuel. The Royal Enfield 500cc Bullet (with electronic fuel injection) is a very robust motorcycle and ideal for the task demanded from it here. Somewhat down on power at 27 bhp and slow revving from its single cylinder long stroke specification it is nevertheless, with a bit of judicious help from the gearbox able and up to the job of climbing quite steep gradients.

A motorcycle tour off the beaten tracks

The clockwise route we were to ride began and finished in Chiang Mai visiting the North Eastern tip of the country and was of 12 stages including 10 days of riding covering a total distance of 1913 kms. Stops for coffee or sight-seeing were frequent and there was indeed so much to see and photograph. The local Thai drivers are in the main courteous and the general demeanour of the Thai people is happy and welcoming, the atmosphere in no way threatening. First we headed in a Westerly direction from Chiang Mai before bearing to the North and leaving urban and major roads to quieter stretches where the road surfaces were surprisingly good. Sweeping bends and a chance to get to know the machines we were riding. No two machines ever ride exactly the same and confidence grows as the controls become more familiar. 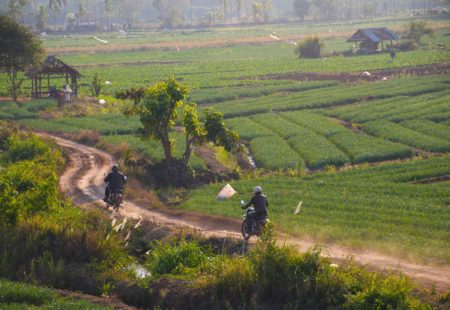 This trip is not about speed and the Bullet is very happy to plug along all day at 80 kph and 95 kph could be considered its top whack before there becomes a major compromise with comfort. Our steady progress to the North brought us to the town of Mae Hong Son We had paused on route to enjoy a wonderful view from Thailand’s highest peak at 2500 metres. A lunch stop at a roadside café with a kind of soup with sausage, noodles and vegetables and soft drinks all included in the cost of the tour. Beautiful roads with steep ascents and descents and rewarded with glimpses of green hillsides and deep valleys to our destination for the day at a charming resort hotel. The journey took us into fertile valleys where much staple food is being grown with brassicas, cereal crops and strawberries in great abundance. Our first hotel had two wonderful swimming pools and I took time to relax in one of them, filled with unchlorinated water to watch the sun set over the rice paddies. 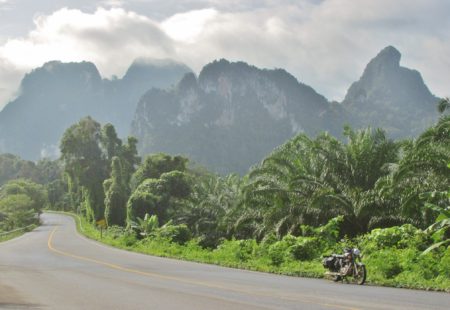 Throughout the tour our accommodation was in excellent and comfortable hotels or resort hotels with generally good facilities, some with swimming pools. We had a day of rest on the seventh day when we visited the Golden Triangle in the North eastern tip of the country. When I say day of rest I am of course referring to the day being generally spent away from the bikes but of course it was also a day of discovery firstly to the Opium Museum which was set up by the Thai Royal Family and later a trip across the mighty Mekong River to make a short visit to Laos and a tacky market at which, if one desired it was possible to buy whisky that included a dead snake in the bottle.
Laos does not appear to be as affluent Thailand but any new experience is of interest and we must not be judgmental on first impressions.

The influence of Buddhism throughout the country is apparent with beautiful temples and ornate statuary to be seen at so many places along the way. It was possible to visit the many temples with the footwear of course being left at the entrance and the jaw would drop at the gilding and the art treasures to be seen displayed. Surely the finest of these temples was the White Temple founded in the 12th Century and after falling into a state of disrepair it was rescued in modern times and renovated to shimmer in brilliance in the tropical sunshine.
The whole of the ride was completed in dry mostly in very warm conditions, typically fairly humid tropical weather. A regular and constant supply of cooled bottled water was available at every stop. Very thoughtfully we were provided with cold moist towels to refresh ourselves with usually, at the last rest point before completing the day’s ride. It is the little things as well as the major elements that make a significant contribution to a most enjoyable, comprehensively planned tour.

Of course there is so much to tell of what was seen and experienced for the tour and for certain Vintage had really thought deeply about the content of this motorcycle tour and had assembled a knowledgeable team. Many thanks Vintage Rides for an experience that will remain with me for many years. Well done!