Do you know Gene-Vincent Burdet? He only started working at Vintage Rides last July although it feels like he has been a part of our team forever. So much so, he feels comfortable chatting to us about anything and everything from biking, Royal Enfields and sidecars to his taste in music.

With a name like Gene-Vincent, we're sure he's got a story to tell. The first thing he explained was that biking wasn't something he chose, it chose him. Unlike many, he didn't start going out on the bike in search of escape, self-assertion or freedom. "I grew up with bikes, or on bikes, I should say!" Biking isn't a trend, it's a way of life: "above all, it's a way for me to get from A to B and travel, of course. My father took us everywhere with him as kids, we even travelled across Europe as a family in a sidecar," he told us. His father, Jean Burdet, has been devoted to his passion for two- and three-wheelers throughout his life but always fitted his family in. 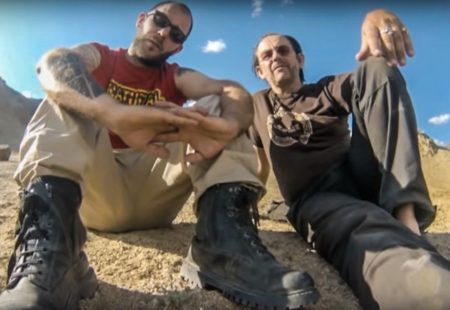 The road is calling

Shortly after graduating, Gene worked with his father as a managing assistant at Heritage Import, which used to be the official Royal Enfield importer in France. See what we mean about Royal Enfields being part of Gene's make-up! Rather proud of being a pioneer and representing the legendary Indian make, it was during this period that Gene met Alexandre Zurcher who had just founded Vintage Rides. The young entrepreneur met the Burdet family to talk about going into partnership together. "Alex came and proposed his rather crazy idea to us, which involved organising motorcycle raids in India for French bikers. We decided to support him by giving him a Royal Enfield so he could promote Vintage Rides throughout France." And that's not where the story ends. Gene-Vincent is now in charge of spreading the Vintage vibe and meeting riders all over France.

A guitarist on the roof of the world

The Burdets and Vintage Rides forged a friendship over the years at various fairs and then by organising event trips. In 2014, it was Jean’s turn to have a rather crazy dream: he wanted to travel with his son to the roof of the world, Ladakh, by sidecar. Christened the Dzo, Jean designed a Royal Enfield sidecar fit for adventure. Gene met the Vintage Rides office team, mechanics and saw the garage when he arrived in Delhi. "That was my very first trip to India. It was more of an expedition than your average classic motorcycle tour. We partly organised it to celebrate my 30th and my dad's 50th, so that we could ride together again after so many years," he recalls. They were the first people to ride the world's highest motorable pass, from the Manali-Leh road to Khardung-La, with this type of bike. 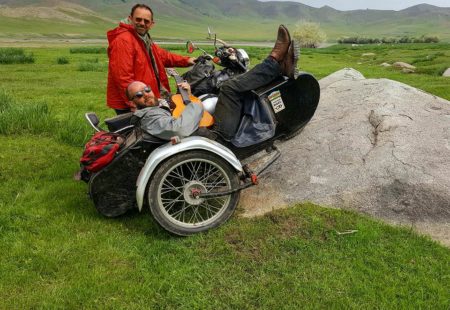 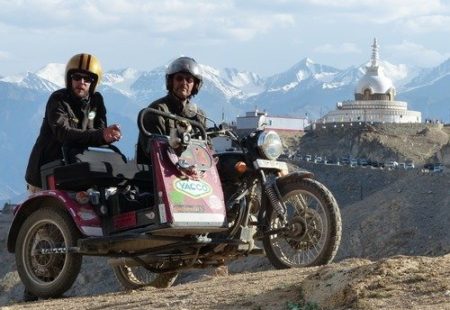 Their way or the highway

They quickly revived their love for the road; after all, we know how addictive it is! This sidecar motorcycle tour in Himalaya was just the start of many adventures with Vintage Rides. In summer 2016, East Side Story was born in Mongolia. In partnership with Jean's business, Alternative Side-Car, Vintage Rides offered its first sidecar tours to riders wishing to cross the steppes on these unique motorcycles: Jean's Yeti sidecars attached to Royal Enfields. "I've always worked with my dad at one time or another and this is when I got to know Vintage Rides better and I got a real feel for working as a travel agent," he explained. Then, some months later, it was Gene who had his eye on another crazy project: Frozen Ride, a dream shared by both Jean and Alex, which became a reality in winter 2017 on Lake Khövsgöl in Mongolia. "We had plenty of experience fixing sidecars to classic motorcycles, but never had we ridden one on a frozen lake! That was a real first!"

Dreaming of life or living a dream?

At 35, Gene is a father and lives in the suburb of Paris, where he bought his childhood home. He came into himself at a young, booming French perfume company, where he worked for several years. Nevertheless, his passion gradually caught up with him. It was time for this mature, young man to take stock of things! To prevent the onset of a mid-life crisis, he decided to take the plunge and become part of the Vintage Rides adventure. He confirmed he wasn't afraid of the job, "as long as I enjoy it and there's a good atmosphere." Placed in charge of events and partners in France, he hits the roads for warm-up drinks events, motorcycle fairs and meeting riders to clear up any queries or misconceptions they have about Royal Enfields. 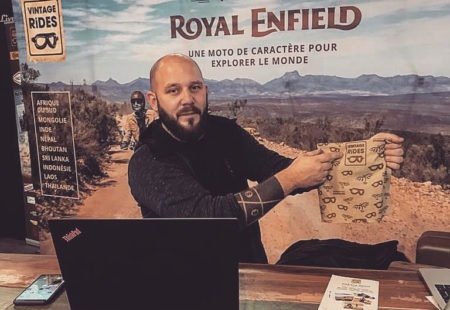 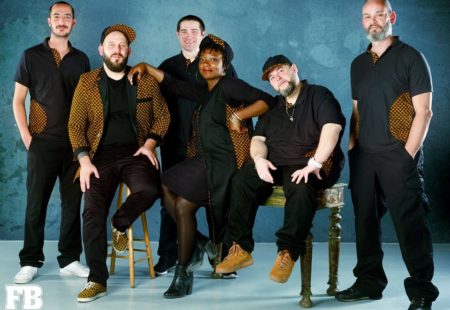 So we know his passions include motorcycling, travelling and meeting new people but we mustn't forget his love for music. “My dad gave me a guitar for my 18th birthday and I taught myself how to play.” We suspect that, given his name, Gene-Vincent's lullabies were the rock 'n' roll hits of the 50s and 60s, but growing up listening to the radio in the 90s, he was bound to have come across different genres. "When I was a teenager, I discovered rap and reggae. As it happens, reggae was my favourite. I was glad to find a type of music that I loved. It felt like it was meant for me and I didn't need to inherit my father's taste in music." Since 2007, Gene has played in Natural Mighty and the group's hard core hasn't shifted since the start. "It's crazy because we've been meeting once a week to practice for more than 10 years! That's what pushes us to keep it going!" Natural Mighty has just released their second album Reflection of my dreams and performed at Boule Noire concert hall in Paris. They will be announcing new dates in the spring.